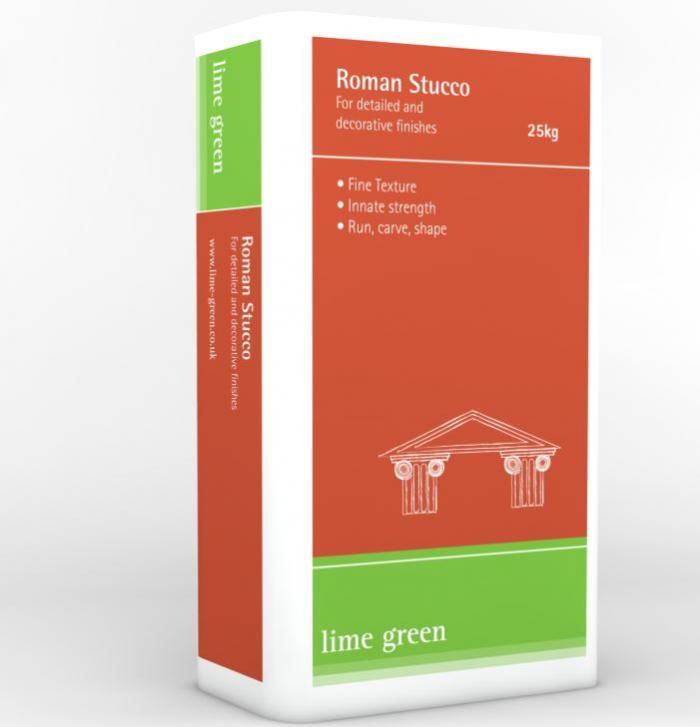 From£21.33 + VAT
Lime green Stucco is based upon Roman cement, a traditional binder invented around 200 years ago.

Roman cement was discovered in the 1790's. It allowed for thick layers of Stucco to be built out and moulded into ornate shapes, allowing stucco over brick to immitate the finest stonework. Stuccos made from Roman Cements became very fashionable for around 100 years due to their high quality stone-like appearance, their durability and their rapid set.

Our Roman Stucco is made with a natural Roman cement, still burnt in original 19th Century kilns. Using this, we have created a contemporary product that sets rapidly, with a fine texture and an innate strength which ensures it can be cut, carved and shaped with remarkable detail.  These characteristics mean Lime Green's Roman Stucco is specified for high profile projects such as the refurbishment of Osborne House (Queen Victoria and Prince Albert's family home on the Isle of Wight), for repairing King's Cross in London, or for the complete renovation of the striking Gunnersbury Park

Roman Stucco Undercoat, used to build out the  inital shape by running in-situ or plain rendering
Roman Stucco Finish Coat, available in 3 textures to give the decorative final coat
Roman Stucco Cast, for pouring into moulds on a bench, it can typically be de-moulded after 20 minutes
Roman Stucco can be left unpainted, to weather naturally. It will initally appear grey, but due to the naturally high iron content of the source limestone it will slowly "rust" to leave a beatiful golden to orange patina, a look that is almost impossible to imitate. As it ages over many years Roman Stucco will weather like stone, developing a slightly mottled patina making it appear ancient and natural. Alternatively, mineral silicate paints have excellent compatibility as they are highly breathable and are available in a wide range of colours; in either case you will end up with a durable, biocide free render.