A lime training week was run at the end of February 2014 in Sicily by Womersley's Ltd and this is an article about the event and what was learned in the process.

The training area was set in an olive grove overlooking Taormina and the Ionian Sea which meant worked occasionally slowed, because at times you had to just stand there and admire the view. We tried to only use materials we could find on the site to build a kiln, burn limestone and product hotline mortars to start to repair a ruined Sicilian house. 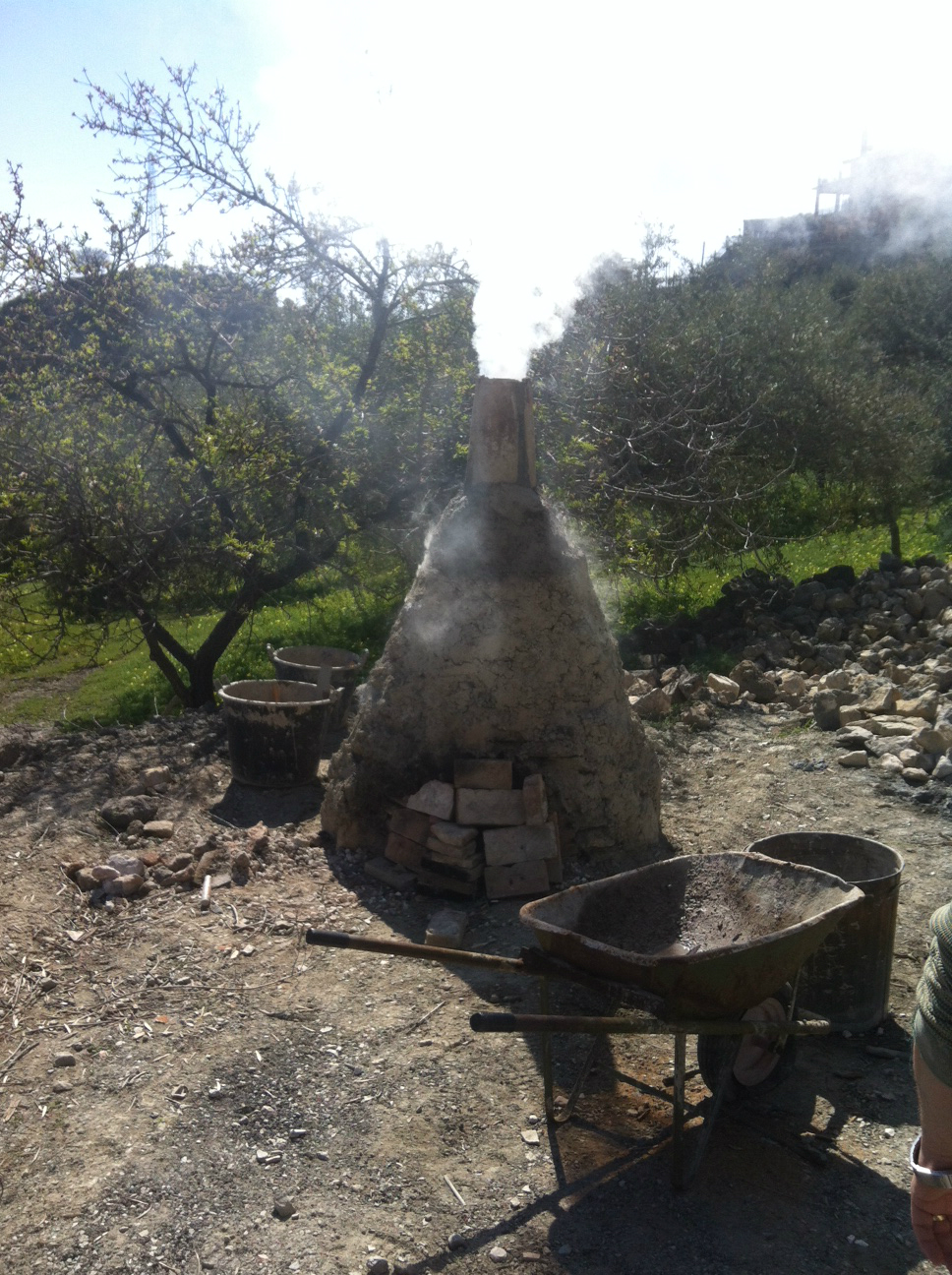 The lime stone in the district of Castelmola and Taormina has been burnt in series of lime kilns built into a hillside located near to the railway station where Taormina runs down to the sea and becomes Giardini-Naxos.

We assumed that the local limestone would burn well to produce a quick lime. The lime reacted with weak acid and was coated with a dusty layer of calcium carbonate. With this in mind we constructed a Kiln using stone we could find on the site and clay mortar, made by just digging up the adjacent ground and mixing it with water. The clay mortar was ideal for the job and looking at local houses built before the arrival of mass concrete walls it appeared the locals also used this locally available clay mortar. In the surrounding areas there also appeared to be evidence of clay mortars stabilised with quick lime, which would be good to study further on the visit next year.

The Kiln was simply circular on plan tapering to a chimney at its apex. A brick arch was constructed at its base. Before the final few courses where built the kiln was loaded with twigs and small branches taken from a pile of olive branches that had been created by pruning the year before. Larger Olive wood was then cut up and loaded in, before a layer of larger limestone was laid on top. Smaller stones where then put in, before more wood and stone. The Construction of the kiln was finished and a chimney was created by standing three semi-circular roof tiles upright. To ensure the kiln was insulated and that enough of a draw was created without leakage of air the whole thing was rendered with a clay mortar, harled onto the coarse limestone blocks.

The Kiln was lit and we sat down to lovely local Sicilian cooking and a glass of wine.

The following morning we raked out the burnt limestone and added it to water. Unfortunately there was little reaction and we assumed we had not burnt the lime long enough and hot enough, we were aiming for 800-900 degrees centigrade. We reduced the height of the kiln, reloaded it and relit it. The resulting twice burnt limestone was then added to water with a reaction but again whilst it generated heat and noise the available quick lime content in the rock appeared limited.

However as the nearest alternative lime supply was over 60 miles away we decided using steel mesh, bought from the local hardware store, to sieve the partially burnt stone. Using the partially slaked brown quick lime that passed through the mesh we made two hot lime mixes and kept the remainder to form a putty.

The first hot lime mix that we used for repairing a collapsing masonry arch consisted of one part partially slaked quick lime: one and half parts sand made from crushed lava from Mount Etna and one part coarse volcanic ash that has fallen from the sky onto the ground where we were working, only a month before, when Mount Etna erupted. This volcanic ash typically

consists of 17% CaO+MgO content, 47% SiO2 concentration and 16% Al2O3. This mix, whilst lacking fatness, was used to rebuild an arch out of very poor stonework which required many pinning stones and tiles. The mortar, although hard won, set quickly and without any shrinkage. It appears that the lime we had burn contained substantial amount of silica and this had created hydraulic quicklime and when combined with ash had resulted in a fast set although it did not appear to have created a hard and impermeable or brittle mortar.

The second batch of mortar was made from the same partially slaked sieved quicklime, and crushed lava sand. This traditional aggregate is called azolo and is created by crushing the surface layer of the local lava flow which consists of prevalently vitreous scoriae. "Azolo", is a porous material that, after being crushed, becomes a sharp, grey to black, and forms inert lightweight sand. Research by Catania University has not detected any pozzolanic reaction between lime binders and azolo aggregate as would be usually expected when dealing with volcanic materials.

In to this mix of one part partially slaked hydraulic quick lime to one a half parts crushed lava sand we added one and half part of local red “ghiara”.Historically, this clay subsoil burnt by lava flowing over it, was mixed at ratios ranging from 1/4 to 1/3 to form a form a natural hydraulic mortar. Mortar of lime and red ghiara, introduced in 1860, rapidly replaced mortar of lime and azolo, thanks to its smaller lime demand, which was the most expensive material. In the post-war period, this type of mortar was replaced by concrete mortars, because of the difficulty and cost to quarry red ghiara.

This pozzolanic aggregate was extracted from underground quarries, crushed and then sieved. These quarries are now discarded although we managed to find an exposed seam in an old volcanic lava flow, behind a car park in the centre of Catania. We took a small quantity back to the training area and broke it up and then crushed it with a lump hammer, before adding it to the mortar. Mortars made with red ghiara (containing C–S–H and C–A–H) are present in most of the historical centre of the nearby city of Catania.

We then used this mix of lime, azolo and ghiara to repair, daub out and render part of a wall. Again a fast setting mortar had been created again with no evident shrinkage. This was finished with a wet dash finish of the slaked hydraulic lime, sand and azolo to replicate the old render finish on the building.

Finally the lime which we had left to form a putty became a solid lump after only 24 hours and had to be reawakened with a lump hammer before we mixed it with fine silica sand to create a lime plaster finish coat.

The whole week in Sicily included a tour of the two villages where the god farther had been filmed, a visit to Mount Etna together with a vineyard and winery on its slopes, a visit to beautiful Greek Temples, the cove of Islabella, Taormina and Castelmola. The seven days where complimented by great local Sicilain Cooking, created with local passion and pride and a little local wine.