Specifically we were asked to consider introducing insulated build ups where the original materials have been lost whilst retaining a vapour permeable but airtight building. 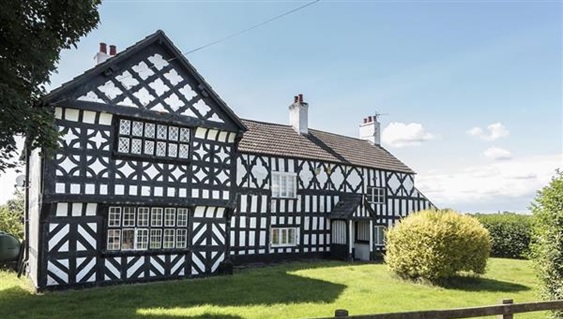 The Context: The Historic Context of Woodford Old Hall

In 1248 the manor of Woodford was one of several in the Barony of Stockport. Land was cleared and improved for agriculture in the late 13th century and in 1355 land at Woodford was granted to the Davenport family.

Over the 16th and 17th century Woodford remained largely agricultural as several farmhouses were built. The most notable development of the period was the enlargement of Woodford Old Hall Farmhouse. The Davenports are known to have extended the old hall at least once, and substantially rebuilt the New Hall in the early 17th century when a  lintel may have been inscribed '1630'. It is a grade II listed building. The hall whilst principally a timber framed hall provides an example of early bricks being used in the area. In the 1720s the local branch of the Davenport family left their Woodford home for the grander surroundings of Capesthorne Hall.

The building today still comprises of the 16th and 17th century farmhouse, with earlier timber framing, but has various later alterations. It is Box-framed on stone plinth with wattle and daub infill, brick additions, rendered rear and had a C20 tile roof. 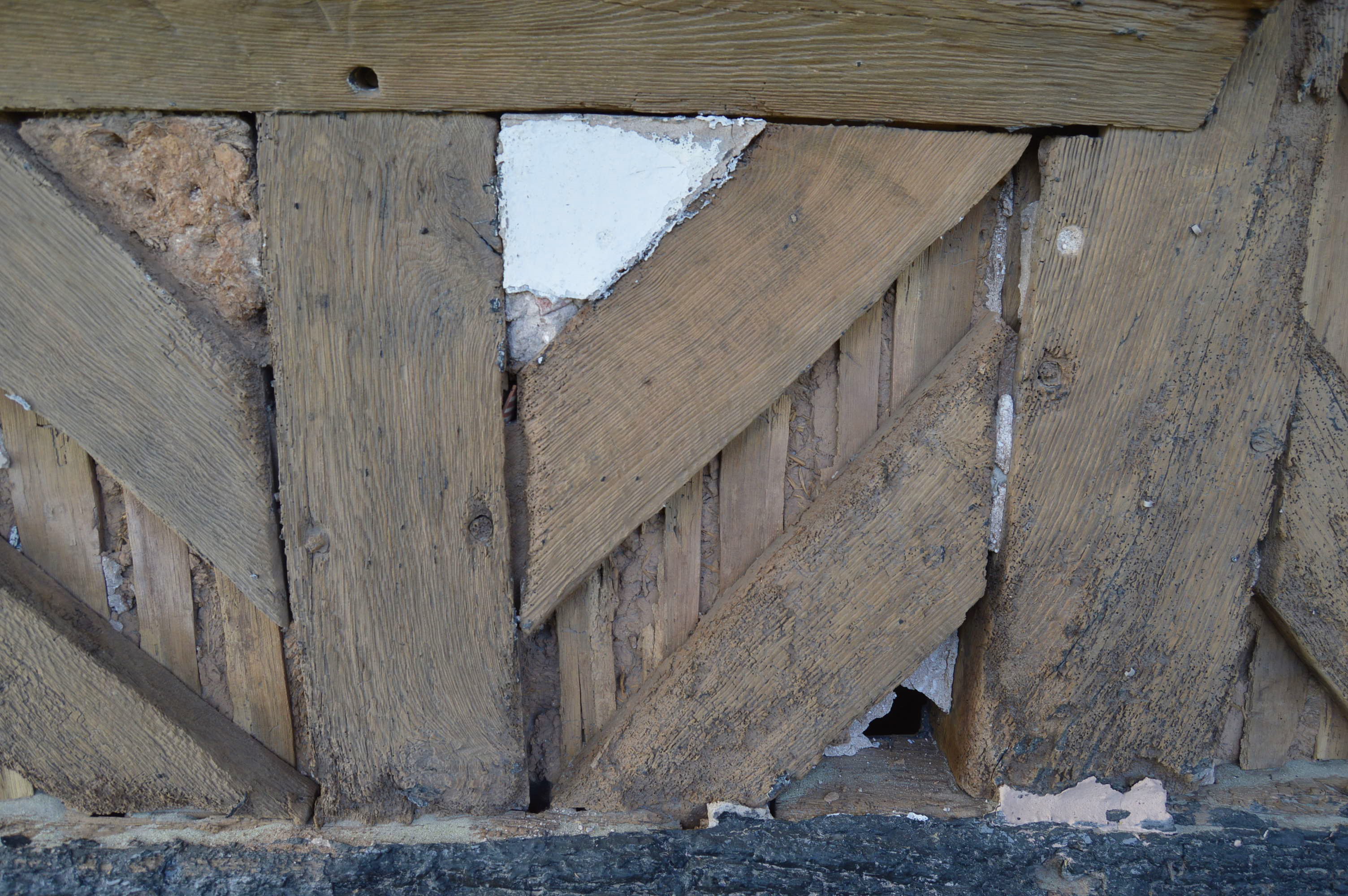 The building is T-shaped in plan with the stem having been raised from 1 to 2 storeys and added to by 1 bay, a lean-to and a porch. Bay 1 projects at front and rear, is gabled, has a coved jetty at both first floor and gable levels and decorative square-panel timber framing which is set diagonally in the gable. Each floor has a 6-light diamond-shaped timber mullion and transom window with leaded lights. The corner posts have carved pilasters. Bays 2 and 3 have been raised in height using brick (probably when bay 4 was built). The framing is close studded and the 2 3-light and one 2-light windows are of a later date. Bay 4 includes a porch and has 2 3-light windows and lean-to at side and rear.

Matrix Archaeology have prepared a very useful an interpretation of the buildings development:

The earliest construction phase appears to comprise the principal timber posts which are integral to the north and south walls of the main house, along with the deep wallplate, at waist-height on the first floor. Raked braces also linked the posts to the wallplate, although only one appeared to have survived. This basic structure appears to represent a medieval open hall.

The profile of the medieval roof appears to have been recorded by structural ‘ghosting’ within the western external elevation. Subsequently, when the roof was rebuilt in the C19, the medieval rafters were removed, and the gable raised to its present extent in brick. At the joint defined by the post-medieval brick work and the C19 brickwork, the medieval roof profile was replicated.

Most medieval houses had a tripartite layout, with the open hall in the centre, and the solar (accommodation for the lord and his family) at the upper end of the hall, whilst the services (kitchen, buttery and pantry) were located at the

lower end. It could probably be assumed that the later cross-wing indicated the C14 solar position; which would then locate the C14 services within the west end of the house.

The truncated timber truss which is visible in the west wall of Bedroom 3 presents an indication of how the medieval hall was spanned. It may be assumed that three such trusses were visible from within the hall, unless there was a closed truss dividing off the services at the lower end of the hall. Dendrochronology has suggested a fourteenth century date for the construction of this open hall (Robert Howard, pers. comm.).

The Context: The Geological and Woodland Context of Woodford Old Hall

Woodford Hall was built using materials that were more locally available from the oak forests of the Cheshire Plain. At this time Woodford was a hamlet on the edge of the Macclesfield Forest, which provided the material for timber-framed construction until the seventeenth century.

The clay daub infill of the panels was provided by clay just below the surface of the land at Woodford, being part of the county’s abundant supply of glacial boulder clays and sands. This also provide clay for local brick making for the later infill of the timber frame panels.

The central Cheshire plain is also overlaid by an outcrop of younger Triassic sandstones. This soft sandstone provides the quoins found in the east elevation of the Solar at Woodford Old Hall.

Lime for the external render finish coats and the thin coat lime plaster undercoats and top coats inside would have had to been brought as quick lime by packhorse, in the seventeenth century, from carboniferous limestones to the south and east of Macclesfield or a small outcrop of Carboniferous Limestone formerly occurred near Astbury or from the Buxton area. The transport costs of the quick lime supply at this period of history meant lime was used only sparingly as a more durable finish coat on clay undercoat plasters and daubs. 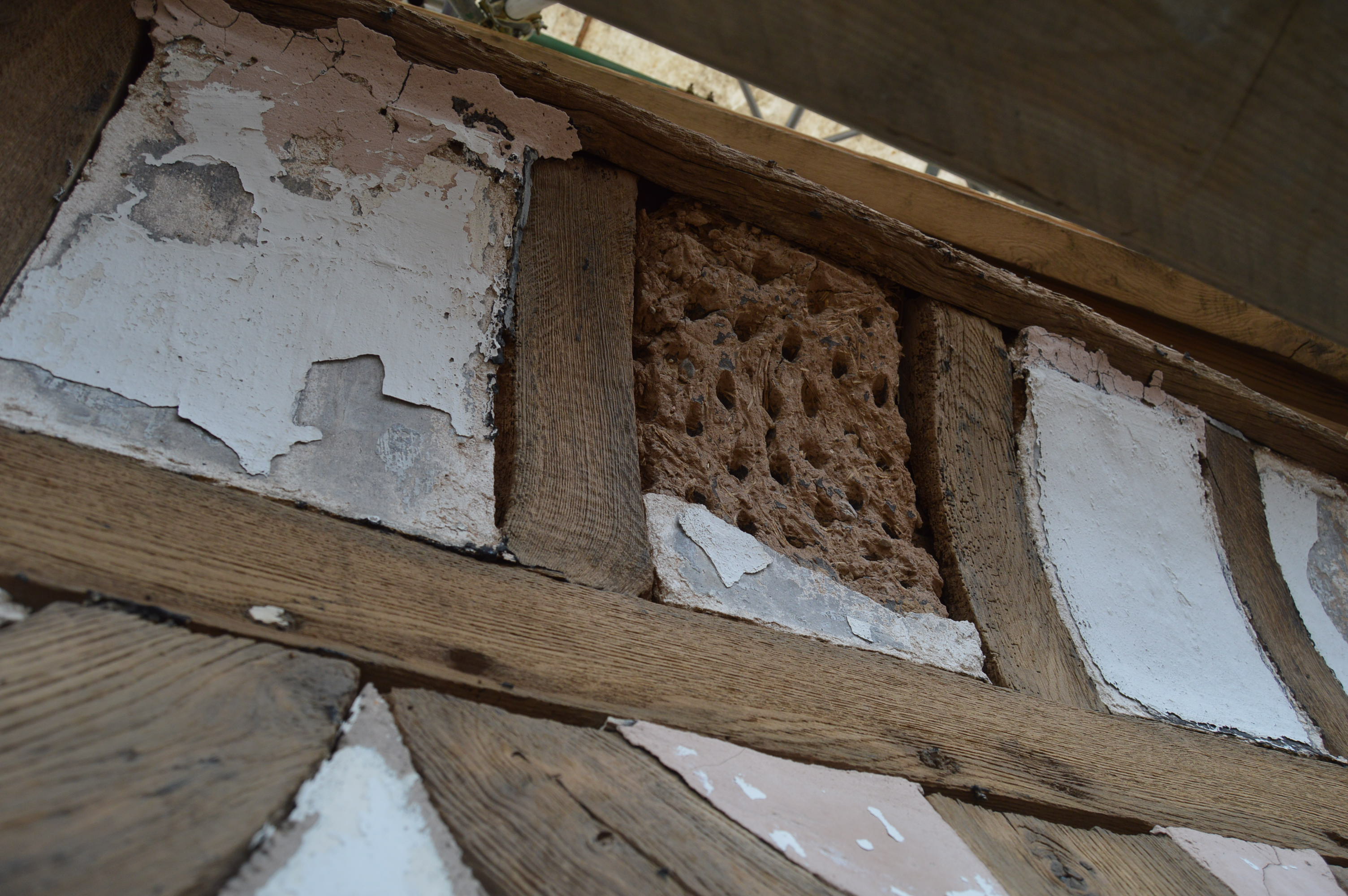