Ordsall Chord is coming to a successful finish

The opening of the Ordsall Chord railway bridge at the beginning of November 2017 was a huge milestone in the Great North Rail Project and in early December the first train crossed the new lines between Victoria and Piccadilly stations, writes Bernadette Bone of BB Heritage Studio in the North West Place Newletter.

Womersleys have supplied a number of the sub-contractors working on this project with different types and strengths’ of hydraulic lime mortars and a selection of good quality sands and aggregates, over the last few years and it is a pleasure to see the works coming to their fruition. 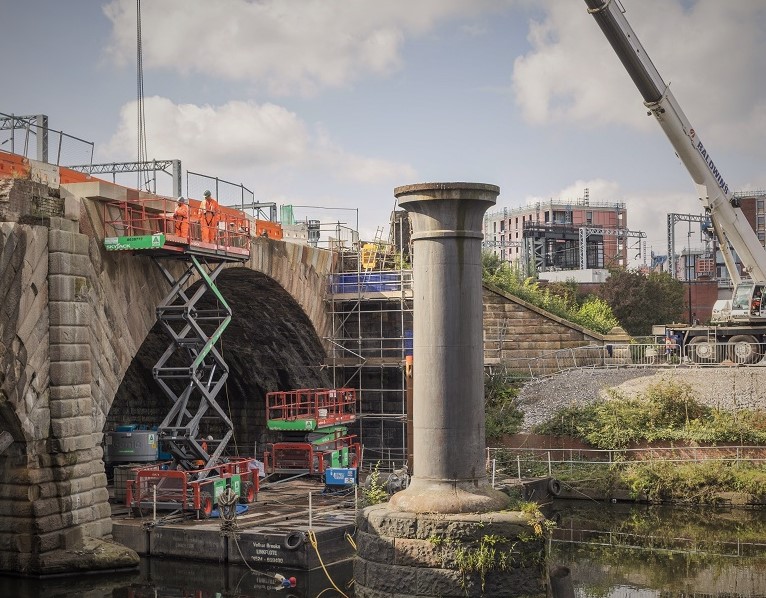 Bernadette Bone’s article is reproduced below:

The construction works associated with the Ordsall Chord project are continuing and 2018 will see the completion of equally significant aspects of the project, including completion of repairs to the historic structures and works that provide further connections through the creation of a sequence of new public realm spaces.

Within the overall Great North Rail Project the Ordsall Chord is unique; no other project has comparable functional requirements or aesthetic aspirations. This is due in the most part to the site location which is one of the most sensitive sites in the historic evolution of the railway. The history of the site spans over 200 years and encompasses not only rail transport history but also roads, canals and the navigable River Irwell.

It is a site that contains the world’s first inter-city railway and which, from its opening in 1830 onwards, has continually evolved and adapted to changing transportation needs. This has resulted in a layering of railway and other transport structures from the 18th, 19th and 20th centuries with each phase of construction providing an example of the engineering approach of its time. The Ordsall Chord railway bridge provides a distinctive 21st century structure, adding the next layer of rail use onto the history of the site.

Working within this context has involved exceptional challenges, made more intricate by the constraints posed by the requirements of the new railway infrastructure itself. But it has also offered unique opportunities.

A particular opportunity has been led by the historic city wide high level viaducts which owe their origins to the route of the 1830 Liverpool to Manchester railway and the requirement to maintain a clear height over the navigable River Irwell. Whilst the requirement to connect into the existing high level viaducts was a principal design constraint it has provided the opportunity to form a new series of public realm spaces at ground level below.

Stephenson’s Bridge, the network arch and a new public footbridge form the setting of a pair of piazzas on either side of the river. From this centerpiece a series of interconnected spaces will lead, connecting key regeneration sites in the surrounding area. These spaces have been carefully articulated so that in each location they respond not only to their immediate context but also seek to enrich the experience of the group of historic transport structures. Structures which were previously in poor condition will now be able to play an active role in the surrounding streetscape and assisted by the conservation led repairs will be accessible for repurposing.

Central to this has been the opportunity to carefully reveal and restore the grade one-listed 1830 River Irwell crossing of the first inter-city railway. The later structure which abutted the bridge has been removed and the radial stone voussoirs and parapet which were lost in the 1860s have been reinstated. The adjacent new public realm spaces which are now starting to emerge on site will ensure that for the first time in 150 years Stephenson’s 1830 railway bridge will be visible from the banks of the River Irwell.

Bernadette Bone is director of BB Heritage Studio, based in Manchester